Bluehost vs HostGator: 5 Tests Based on Our Experience

“We have been a paying customer for both BlueHost and HostGator.

We are monitoring both shared hosting’s servers for Uptime and Performance through our website hostingpill-bh.website & hostingpill-hg.website.

This Comparision of BlueHost vs HostGator is based on actual testing done on their servers.”

It is time for us to witness a clash of the titans.

Bluehost and HostGator are two of the largest and most established hosting companies out there right now.

In a way, the two are related: they’re both subsidiaries of Endurance International Group.

These two brothers, or cousins, together have hosted millions of sites, and are two of EIG’s largest providers.

The truth is, however, Bluehost is an even larger titan—more of a behemoth, up there with GoDaddy in the power of its name and the amount of sites its hosted.

HostGator’s range is in the hundreds of thousands, while Bluehost likely has 2 million or more sites powered on its servers.

Does HostGator live up to its larger rival?

Or maybe the question is this: does Bluehost’s size lead it to overlook certain things, things with HostGator excels in?

These are all excellent questions, and I’m sure you have even more.

If you’ve been looking into what hosting company you want to go with, there’s a fair chance you’ve at least come across these two, if you haven’t put them on your list.

So without further ado, let’s get into our comparison of these two hosting companies!

Jump to see specific test by click on the following links

Pricing is one of the most important things to a prospective customer.

Bluehost in particular is known for being one of the most affordable hosting options, but let’s get into the details anyway.

For shared web hosting, Bluehost starts at $2.95 (discounted price) a month , second & third tiers start at $5.45 and last tier starts at $13.95, though the renewal price will increase between those after your first term.

HostGator’s shared hosting plans start at $2.75 (discounted price) a month and end at $5.95 for the last two tiers as well.

Again, you’ll want to calculate the renewal prices if you plan on committing to these companies long term.

Bluehost has two types of WordPress hosting: standard, and optimized. Optimized consists of four tiers, ranging from $19.99 to $49.99.

Standard WordPress hosting starts at $2.95 and has the same prices as Bluehost’s shared web hosting packages. (If you would like to build WordPress website with BlueHost then refer this step-by-step guide to make a WordPress website)

In summary, shared web hosting between the two is barely different, although Bluehost is marginally cheaper.

WordPress hosting has some larger differences between the two: if you want to get a heavy duty WordPress package, Bluehost has options for you that are on the pricier side.

However, if you want a lighter plan for WordPress hosting, Bluehost also has options cheaper than HostGator’s.

VPS hosting is about the same, but dedicated hosting is considerably more expensive on HostGator.

Got all that down?

Well, we’re not done yet—let’s check out the features!

As you’re well aware, features are what make price x or y good or bad.

I’ll mostly focus on the shared web hosting features for now, but don’t worry—you’ll still get a good idea of what all the price differences above actually entail.

First off, Bluehost gives you one site for its entry-level shared hosting package, but the latter two tiers have unlimited sites.

Basic (tier one) gets 50GB of space, while the second,third and fourth tier again get unlimited space. Bandwidth is unmetered for all tiers!

In addition, Basic gets 5 parked domains and 25 sub domains, and 100MB of storage per email account with a maximum of 5 accounts permitted.

You guessed it—the proceeding tiers have unlimited amounts of all these features.

HostGator’s first tier is called Hatchling, and it also comes with one domain and unmetered bandwidth and unmetered storage. The next two tiers get unlimited domains.

The next two tiers basically have a few more security features, SEO tools, or miscellaneous add-ons to differentiate them.

One last thing: every shared hosting plan on HostGator, even Hatchling, gets a $100 Google Adwords Offer, and a $100 Bing Ads credit.

Honestly, the takeaway is HostGator looks a lot better in the features department.

There isn’t really anything Bluehost offers that HostGator doesn’t offer as well—especially at the lowest price points, as evidenced by their shared hosting packages.

Additionally, some of the most important features—storage and bandwidth, for example, are much more limited on Bluehost than HostGator, and for nearly the same price.

This general pattern applies to the other hosting products offered by Bluehost and HostGator.

The exceptions would be dedicated and VPS hosting: dedicated hosting on Bluehost is cheaper than on HostGator, and the features are not significantly worse.

Look closely though: part of HostGator’s higher prices for dedicated servers might be due to the fact that even their first tier option has twice as much RAM has Bluehost’s, as well as unmetered bandwidth (compared to Bluehost’s 5TB).

Moreover, VPS hosting on Bluehost is not only considerably cheaper, it offers very similar accommodations in terms of storage and tools.

What does having a lot of features matter if you can’t use them? Being able to onboard properly and easily manage your account is essential.

Does HostGator, being the smaller brother, have a more tightly-knit, supported community of users?

Or does Bluehost, being the behemoth, have far more resources at its disposal?

HostGator’s resources are very condensed, being centralized in one page.

The support page is a knowledge base that handles FAQs, how-to articles, as well as video tutorials. I hate the aesthetic of it personally, but it seems easy to use and works fine.

Bluehost’s resources are about as spread out as HostGator’s—that is to say, they’re not.

Although I find their help page to be much cleaner and slick looking, the truth is the page offers less support than HostGator’s.

This is because HostGator’s page, despite looking kind of outdated, is well-organized to the point that you can easily navigate to the article or tutorial you need within 1-3 clicks.

You can search of course, but browsing is very easy.

Bluehost’s has a few categories with subtopics, but if you don’t see your topic listed, you’ll need to search for it.

The nicer part is that you can probably find both a walk-through, video tutorial, and text article for a host of topics.

In this sense, Bluehost’s support page has more information, but HostGator’s is easier to browse.

As far as contacting a customer service representative for help goes, both Bluehost and HostGator offer the same options: phone support, ticket/email support, and live chat.

The first two are about the same, though I should note Bluehost does better with phone support—they have many more extensions, specialized for different topics, than HostGator.

As for the live chat, let’s take a look at two different times I interacted with the two companies’ respective representatives.

Bluehost’s live chat was helpful: I got a response pretty much immediately, though it was likely a copy/paste or bot.

After 2-3 minutes, I got a genuine answer.

With HostGator I also got a response in about a minute, although this was probably a copy/paste or bot as well.

The time it took for me to get the answer I was looking for was about 1 minute.

Overall it seems HostGator had a faster response time for the live chat test.

However, I’m hesitant to declare they have better customer service based on a 2-minute difference—it could be luck, after all.

To take into account the support/help pages, I would say that Bluehost might be slightly better than HostGator for customer support.

Having said that, HostGator still has solid customer support—you might want to take my preference with a grain of salt, and explore their support pages for yourself to see which you prefer.

You don’t want to spend much too time or energy learning how to use a service that is supposed to make life simpler.

As it happens, both Bluehost and HostGator are about equally easy to use. With Bluehost it’s less surprising—they’re such a big name, after all—but HostGator is not really any more difficult than its big brother.

I might say that Bluehost’s user interface and control panel look particularly sleek and modern, more so than HostGator’s (which at times can look a tad outdated).

HostGator doesn’t look bad, but it might be a little easier to navigate in Bluehost. 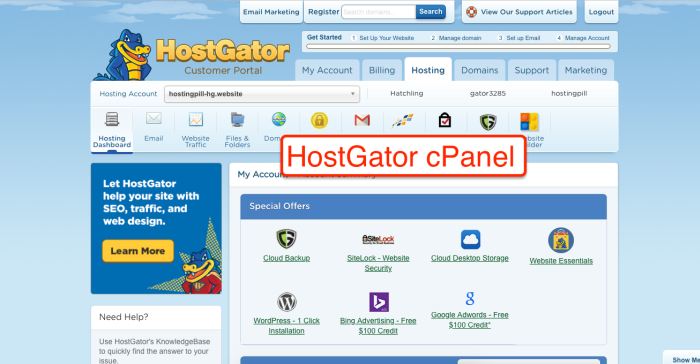 Having said that, I don’t think it’s enough to make a serious difference in anyone’s decision. If ease of use is important to you, both Bluehost and HostGator are quite solid. I can’t recommend one over the other based solely on this factor.

But comparing security is much more straightforward: what measures are protecting your data and the servers, and how does the uptime look?

Let’s start with the methods of protection. HostGator unfortunately does not say much about its security, other than to offer security tools to purchase in addition to your hosting package.

There’s a little page tucked away in their support page about how HostGator’s servers are protected from DDoS attacks, but that’s about it.

I wish I could say that Bluehost’s security is more transparent, if not robust, but it sadly is neither.

They offer security add-ons as well, but that’s about it; beyond that, you’ll just need to trust that they’re as successful as they are because they’ve managed to protect their customers.

Disappointment at the lack of information aside, let’s compare uptime as it’s a direct and visible measure of security.

To check the latest stats of uptime for Bluehost, click here

To check the latest stats of uptime for HostGator, click here

Uptime is important, important enough that even a fraction of a percent can matter. But this is pretty close, and with only two months on our records,

I think the jury is still out (though technically, HostGator is winning).

Ultimately, I’ll say that Bluehost and HostGator are about tied on security.

When these two titans clashed, Bluehost seemed poised to take a victory against its little brother. After all, it’s hosted far more sites than HostGator, and that really should mean Bluehost offers stronger services in some form.

But the results of my comparison beg to differ. Bluehost does do a few things better: its support page is better, and it has more specialized lines for phone support.

The customer service representatives are about equally helpful, though perhaps HostGator has more responsive ones on live chat.

Bluehost has, overall, a much nicer aesthetic and I find navigating around it to be slightly easier. But still, HostGator isn’t really more difficult to use—they’re about tied, and any victory is marginal.

The same is true for security, though HostGator is the one that eeks by. Both services could have a more transparent outline of their security, and both focus more on security add-ons than default protections.

Their uptime scores are very close, with HostGator just barely winning. Nonetheless, that could be chance—when they’re that close, it’s tough to say.

It’s the features and prices that make things less even for the two companies.

With VPS hosting, Bluehost wins again, with significantly more bang for the buck than HostGator.

But with  WordPress, and shared web hosting—likely some of the most popular options for their affordability—HostGator takes the cake.

It offers most of the same things Bluehost does, but adds in more, and has less restrictions on even the entry level packages.

HostGator does all of that for approximately the same prices.

So which do I recommend more?

For now, I’ll say HostGator has won a hard-earned victory as a better hosting service overall, but Bluehost could be a better option for those seeking heavier hosting options such as VPS or Dedicated hosting.

Rest assured; whichever you choose, you should still be in fine hands!

Still not sure which one to choose?